This post may contain affiliate links that I may receive a commission from if you click & buy. In addition, the information on this site is NOT intended to be medical advice. See my full policy for more information. 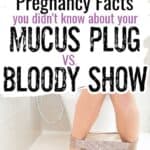 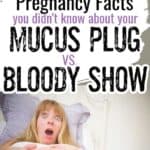 All these fun terms popping up as you make your way close and closer to the end of your pregnancy. Things like the “Bloody Show” and “Mucus Plugs”…heard of em?

Well, oftentimes, many pregnant mamas interchange these two as being the same thing, but there’s actually a slight difference between them.

All in all, one thing is certain, they BOTH indicate you’re getting closer to meeting your bundle of joy.

So…what’s the difference between them? Let’s find out!

What does bloody show mean?

Your bloody show during pregnancy simply means that it’s another sign labor should begin soon!

It consists of a mucousy vaginal discharge, sometimes tinged with some blood.

According to Healthline, “Your cervix is highly vascular, meaning it’s full of blood vessels. Therefore, it can bleed easily. When the cervix starts to open and the mucus plug dislodges, some of the blood vessels in your cervix will rupture and bleed. This is what you see with the bloody show.“

Believe it or not, many soon-to-be-moms will go their entire pregnancy without even noticing they lost their mucous plug OR had a bloody show.

For those who do experience it have reported things like:

What is a mucus plug?

Your mucus plug is essentially a plug made up of mucus that blocks & prevents bacteria from entering your uterus.

As your body prepares for labor and your cervix starts to dilate, the plug will dislodge.

Sometimes this happens in one lump sum or in small chunks at a time.

Like the bloody show, some women don’t even realize or notice when they’ve lost their mucus plug.

Other times, it won’t dislodge until right before labor begins.

The mucus plug appears as a clear or sometimes a yellow-tinted thick gelatinous mucus without blood present.

When will you lose your mucus plug?

As mentioned above, you may or may not visually notice you lose your mucus plug.

You can lose your mucus plug a day before up to 2-3 weeks before going into labor.

I know I know, more waiting for baby, what gives?!

From my experience, I lost my mucus plug with my first right around the 37.5 week mark. I simply used the restroom, wiped and noticed it was there!

With my 2nd, I lost pieces of my plug starting around week 37. I would notice small chunks with every restroom visit (which is a lot during those last few weeks LOL).

I won’t lie, with each, it definitely gave me the boost of hope I needed to remind myself my body was preparing for the big day and we were in the home stretch!

Your bloody show and mucus plug are a normal part of pregnancy.

Although appearing very similar to one another, they are different.

The bloody show always has blood present due to the ruptures vessels in your cervix that cause the bleeding. Whereas the mucus plug is a thick gelatinous plug that will dislodge without blood present.

After experiencing one or both, labor could begin within hours, days and sometimes a week or two.

All in all, these are great signs your body is continuing to prepare for giving birth and you should soon have that little baby in your arms!

Looking for more posts to prepare for Labor & Delivery?

Read more about me here!